So, you’ve decided to give photography a go and have invested in an awesome new camera. Now there’s only one problem – you’re not too sure what aperture, ISO and shutter speed mean! Well, that’s what the CameraPro team is here for. Let’s get to it.

The key thing to understand with photography is that it’s all about LIGHT. And using the exposure settings on your camera will control how your camera sees and processes the light that comes in via the lens. Makes sense, right?

Now, the three key elements of exposure are ISO, Shutter Speed and Aperture. Using these three settings will control how your photographs look, and knowing how to control them will help you get the most out of your camera and create interesting and beautiful images.

So, what do ISO, Shutter Speed and Aperture actually mean?

What is ISO on a camera?

Essentially, ISO controls how sensitive your camera’s sensor will be to the light coming in via the lens.

The lower the ISO number, the less sensitive your camera is to light and the finer the grain in the image (also called ‘noise’).

ISO can range from 50 – 102400, however not all cameras will have a range this large. If you’re wanting to do a lot of low light photography, then ISO range and capability is something you should consider when buying your camera.

What ISO should I use?

As a general rule of thumb, it’s best to keep your ISO as low as possible (generally ISO 100) whenever possible. This is because the lower the ISO, the less grain will be visible in the image.

Of course you should always bump it up when required - a grainy photo is always better than an out of focus photo!

Below are examples of when to use a low or high ISO: Generally used in darker situations when not as much light is available, to get faster shutter speeds, such as:

What is shutter speed on a camera?

Simply put, shutter speed is how quickly the camera will open and close its shutter.

What shutter speed should I use? Aperture (also known as F Stop or F Number) is the size of the opening inside the camera lens when you take a picture. The aperture controls how much of your image is in focus (also known as the depth of field).

It’s worth nothing - The aperture is completely dependent on the lens you use (rather than the camera), and not all lenses have the same aperture range.

The aperture scale goes from F1.0 to F32, however very few lenses will offer the entire scale.  Aperture is important to consider when buying a lens, as different lenses have different aperture ranges.

Which aperture should I use?

Typically a small F number is used when you want a small amount of the image in focus (small/shallow depth of field).

A large F number is used when you want a large amount of the image in focus (large/deep depth of field).

Below are two examples: Most often used for: Most often used for:

OK, now let’s put it all together – here’s some examples of different shooting scenarios. 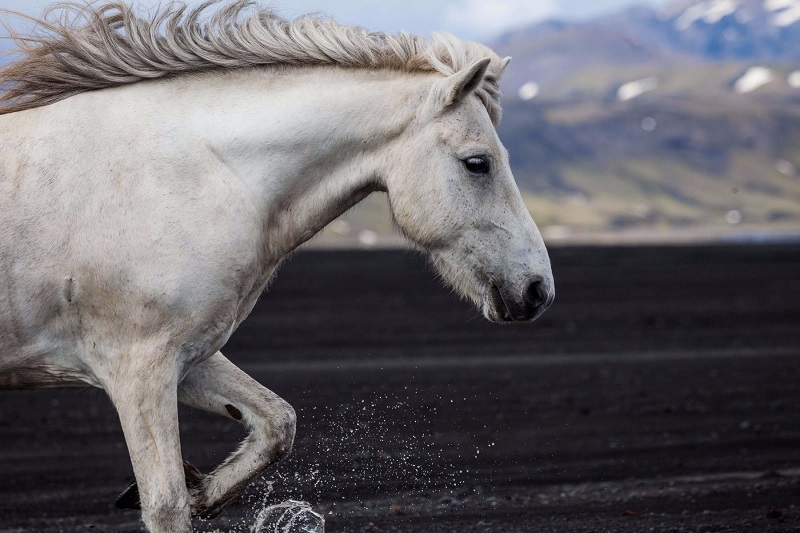 Aperture: Small F number of F/5.6 so the horse stands out from the background

Shutter speed: Very fast 1/2000th Second to freeze the movement of the horse and the water droplets

ISO: Due to the fast shutter speed, this meant we had limited light entering the camera, so to help up get a correct exposure, we increased the ISO to 800.

Aperture: Large F number of F/16 so that everything in the frame is in focus

Shutter speed: Slow shutter speed of 1” (one whole second) – this is needed for a long exposure, to give the water a blurred/smooth effect (rather than freezing the movement)

ISO: Low ISO of 100 – as there was a long shutter speed meaning a lot of light would be coming in to the sensor, the ISO is lowered to keep the image as clean and noise free as possible

To control aperture, shutter speed and ISO individually you can shoot in manual mode.

As with everything else in photography, it’s really about what works best for you.

Now that you know what aperture, ISO and shutter speed are, get out there and experiment! Try new subjects, new gear and new conditions. Make mistakes, and make something amazing! At CameraPro, we’re right behind you every step of the way.

Need more advice on how to take the right exposure?

Ask one of our knowledgeable team in store, online or over the phone.

← Previous
Related Articles
Beginner's Guide to Digital Cameras
Looking to buy your first camera, or wanting to upgrade your existing one? There are literally hundreds of cameras to ...
Read More
How to Choose a Mirrorless Camera
Thinking of getting your first interchangeable-lens camera, upgrading from your point-and-shoot, or switching ...
Read More
Filters Explained
As well as protecting your lenses, filters can create stunning effects and overcome tricky lighting, achieving...
Read More
Getting Started with Long Exposure Photography & ND Filters
From dreamlike landscapes to dynamic light trails, long exposure photography can utterly transform otherwise o...
Read More