SKU
DC-FZ80GN-K
Be the first to review this product

$478
Check stock
Whats in the box? Add to Wish List + Add to compare 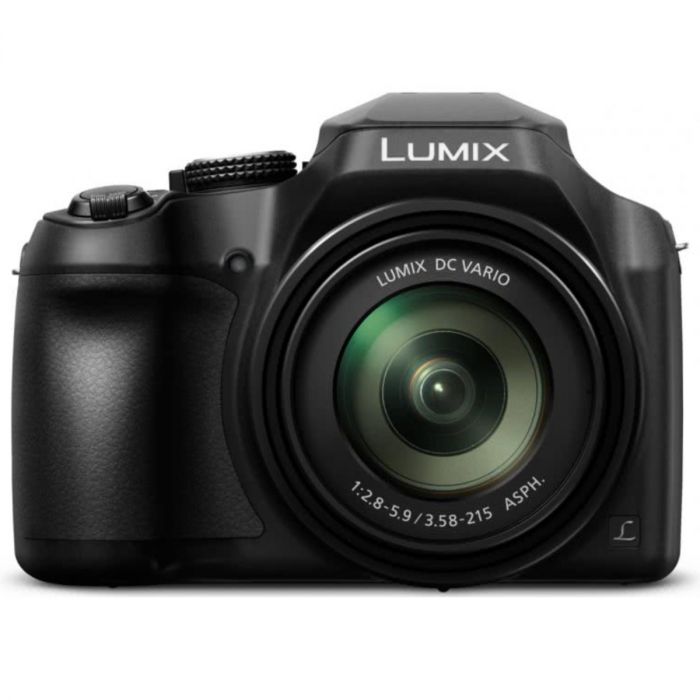 Capture moments near and far. The 20-1200mm zoom lens and 4K Video/Photo recording capability will make sure you catch those fleeting photo opportunities in active outdoor situations.

Taking Bridge Cameras to Another Level

The LUMIX FZ80 bridge camera is worth to be called an "All-Rounder". Photographer and LUMIX Ambassador Jacob James discovered the colourful and vibrant life of the streets of Tel Aviv only using his LUMIX FZ80.

The 20mm wide angle lens allows you to shoot breathtaking landscapes in wide panoramic pictures. For more details you can use the powerful 60x zoom to capture moments you don't even see.

The LUMIX FZ80 perfectly fits in your hand with a safe and ergonomic grip. Thanks to the viewfinder, you always have a clear view of your environment even in bright sunlight. A bridge camera for everyone that is perfect to take on your adventures.

No More Blur at 60x Zoom

Stunning macro photos can be shot with minimum focusing distance of 1cm. You can enjoy shooting close-up shots with the LUMIX FZ80 to express spectacular details of flowers, insects and so on.

Make it easy to shoot high quality pictures in dynamic and fast-moving environments. Just shoot a short 4K video sequence with 30 frames per second and save your favourite picture as a high resolution image in camera. A perfect feature to capture your adventures.

Relive your favourite unmissable moments by recording your biggest adventures and most important steps in life with the LUMIX FZ80. The 4K video mode is up to 4x resolution of Full HD. Amazing quality for your fast paced action and exciting scenes.

4K Live Cropping enables unique video expressions that were previously difficult to record. Only the recording frame moves while the camera maintains a fixed position. This allows stable panning, and lets you zoom in on a subject that is not in the image's centre position.

You can record high-speed videos at 100fps (For NTSC area: 120fps) in HD quality. You can capture scenes that can't be seen with the naked eye, and play them back in dramatic slow motion.

Taking photos without worrying about focusing. Based on the newest 4K technology, the Post Focus feature gives you the power to touch the area you' d like to be in focus, even after the shot has been taken. With the Focus Stacking feature, you can easily selected several focus points in the same image to give you more creative freedom. A feature which saves you time to focus on the more important things in life!

Focus Peaking function shows the peak of focus in MF and AF+MF mode. It is also available in remote photo / video shooting with smartphone / tablet via Wi-Fi

High shutter speed at max. 1/16000 sec with an electronic shutter enables you to capture spur-of-the-moment of fast moving subject. It also lets you open the aperture even outdoors, and reduce washouts even under strong sunlight.

When the sun goes down in Tel Aviv, the young city wakes up and turns night into day. Capture the dynamic, hip and young crowd or the skyline at the best time of the day. Great picture quality even in low light conditions.

The 3.0-inch rear monitor with a high resolution of approximately 1,040k-dot features higher visibility even for sunny outdoor shooting. And, touch control immediately lets you to set focus to the subject by just touching it on the screen and you can even release the shutter.

Unwire Your Creativity Via Wi-Fi

The connectivity features of LUMIX FZ80 expand the usability of the camera in many ways. The camera can be controlled by using the 'Panasonic Image App' on your smartphone or tablet device enabling you to view the image, set the focus, release the shutter from a distance or review photographs on the large screen of your tablet. Or even share your images on social medias.

The camera's battery can be recharged via USB according to your convenience.