SKU
VQA020AA-Demo
Be the first to review this product

$560
Check stock
Whats in the box? Add to Wish List + Add to compare 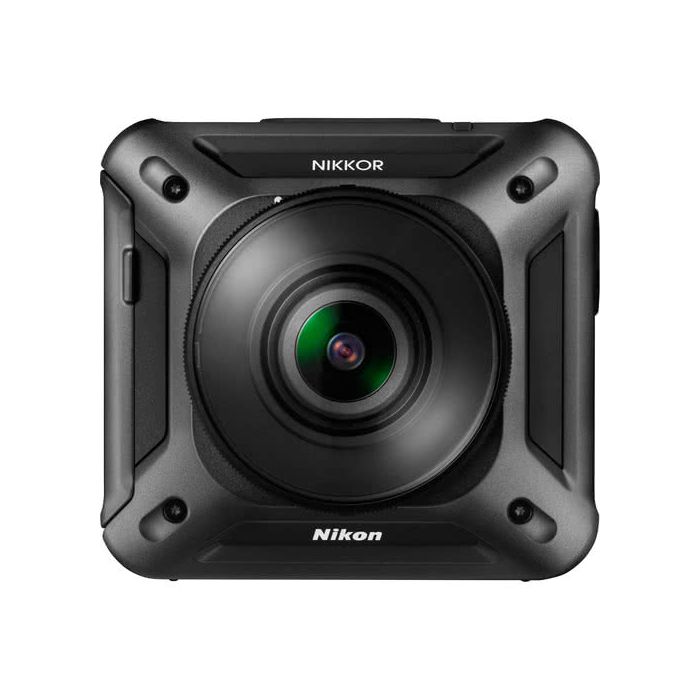 Extraordinary missions are both big and small, from the bold, risk-taking adventures to more personal quests to reach a goal. Now there’s a KeyMission camera that can capture each one in sharp, vivid detail - a wearable companion for your life’s greatest experiences.

The new Nikon KeyMission cameras are built to withstand the elements with bodies that are waterproof, shockproof, dustproof and freeze-proof. Each climb, ride or wave is recorded with such clarity, it’s like reliving your best adventures.

True missions have no borders, and neither does the KeyMission 360.

When it comes to immersive video, this mountable action camera is the real deal. Equipped with two bright, ultra-wide-angle NIKKOR lenses and two CMOS image sensors, it delivers spherical 360° 4K/UHD¹ footage and 23.9 MP photos with no blind spots. Images from each lens are automatically combined in-camera: all you need to do is hit the record or shutter-release button.

Every possible vantage point is covered and no terrain is off limits. Dedicated mounts leave you hands free and the camera is waterproof to 30 m without separate housing². Nikon’s SnapBridge 360/170 app⁷ makes it easy to relive or share your adventures.

The KeyMission 360 is a compact, mountable action camera that gives you the power to shoot spherical 360° 4K/UHD¹ video and high-resolution stills. Now you can bring your missions to life and immortalise your experiences from sensational perspectives. The camera boasts two NIKKOR 1.6 mm f/2.0 lenses, each with a 180-degree angle of view, and two powerful RGB CMOS sensors. The images captured through each lens are automatically stitched together in-camera, creating one spherical 360° video or 23.9 MP still. Simply hit the record or shutter-release button and you get the full, vibrant beauty of your surroundings in unprecedented, immersive detail, with no blind spots. The camera’s true 360° imaging captures everything the eye can see, plus details you might have missed during recording, and which you can choose to focus on during playback: the light on the buildings behind you, the look of joy on every face in the festival crowd, the eagle that briefly joined your skydiving team.

When your quest takes you off the beaten path, the KeyMission 360 is just as tough as you need it to be. Designed to stand up to challenging conditions, this camera can shoot immersive video of underwater explorations as deep as 30 m without a separate housing². The shockproof³, dustproof⁴ body can tolerate drops from heights of up to 2 m, so you can easily document every angle of a demanding trek through rocky terrain to a remote village. You can even rely on the camera to perform when shooting in temperatures as low as -10° C.⁵ Wherever your mission takes you, from the upper slopes of a mountain to the world beneath the waves, the KeyMission 360 will record every detail.

The KeyMission 360 shoots incredible 4K/UHD¹ video at 24 fps. Experienced through the camera's immersive playback options, your footage will pop with the emotion of real-life adventure. Full resolution ( 23.9 MP) stills can be captured whilst filming, and a range of versatile movie functions let you quickly enhance video footage. Create immersive 360° travelogues using the Superlapse movie function, which enables a central subject to be placed in quickly changing scenes and settings. Use the Loop Recording function to record multiple spherical videos for preset periods of time. Create a 360° time-lapse of the night sky, the base camp set-up, or the aftermath of a rally.

Relive your experiences like never before. The entire 360° spherical image is composed and processed inside the camera, and you can play back footage via your smart device. As you move the phone or tablet, it seamlessly reveals the whole environment: just as though you were looking at it in real life. Nikon’s supplied Cardboard Headset AA-17 heightens this virtual reality effect by cutting out external stimuli. You can control what you see by simply moving your head. Playback is also possible via your computer or laptop, as well as on Facebook or through YouTube’s 360° video channel. Nikon’s SnapBridge 360/170 app⁷ lets you share 360° 4K/UHD¹ videos direct from your smart device. The app’s built-in electronic Vibration Reduction (VR) uses shooting information about horizontal, vertical, and rotational camera movements to compensate for camera shake. The result—every epic 360° video you view will be sharp and steady.

Keep your hands free and your camera protected wherever your mission takes you with Nikon’s dedicated mounts, rods, and accessories. From the most compelling natural environments on earth to the jostle of a festival crowd, almost no situation is too extreme. Accessory mounts for the KeyMission 360 securely attach the camera to helmets, wrist straps, and even vehicles. Use the Vented Helmet Strap Mount AA-5 to get a rider’s-eye view of the downhill run, or a climber’s perspective on the summit. Get inside the barrel of the wave with the Surfboard Mount AA-9. Give your viewers the definitive festival experience with the Handy Grip MP-AA1. Each accessory mount is rugged and easy to use, just like the camera itself. Wherever you go, the supplied, interchangeable, and rechargeable EN-EL12 Li-ion battery will keep you shooting for extended periods of time. And when your quest takes you right into the heart of the action, use the supplied lens protector, underwater lens protector, or silicone jacket to give your KeyMission 360 extra armour against the elements.

This changes everything. It has never been easier to share unique 360-degree images that truly immerse viewers in your story. The KeyMission 360 is Bluetooth®⁶ enabled, and compatible with Nikon’s SnapBridge 360/170 app for smart devices as well as the KeyMission 360/170 Utility⁷ for PCs. Utilising Bluetooth®⁶ low energy technology, SnapBridge maintains a constant, low-power connection between the camera and your smartphone or tablet. Connecting the camera to your smart device is an easy, one-time operation. Once it’s done, stills can be transferred automatically from the camera to your device. You can also stream 360° live view through your smartphone or tablet screen, before you begin to record. The SnapBridge 360/170 app⁷ also lets you adjust key camera settings via your phone, keep your camera on time and up-to-date, stay updated on firmware, and more. Beyond your smart devices, the footage can also be viewed and edited a computer on which Nikon’s KeyMission 360/170 Utility⁷ is installed.

Incredibly compact and easy to control, the KeyMission 360 is almost unnoticeable when you’re in the heat of the action. The camera weighs in at just 198 g with battery and micro SD memory card, and measures just 65.7 mm (2.6 in) at its widest edge. Large movie-record and shutter-release buttons are the only controls on the body of the camera. The rest of the camera’s settings are controlled using the SnapBridge 360/170 app⁷. And for explorers who want to go further, the fact that the camera accepts Nikon’s high-capacity interchangeable EN-EL12 Li-ion battery is a serious advantage. One battery is supplied with the camera and you can purchase an additional back-up unit for those times when you want to be sure you have the power to keep recording in remote environments. No need to re-charge, simply swap out the battery and keep on shooting.