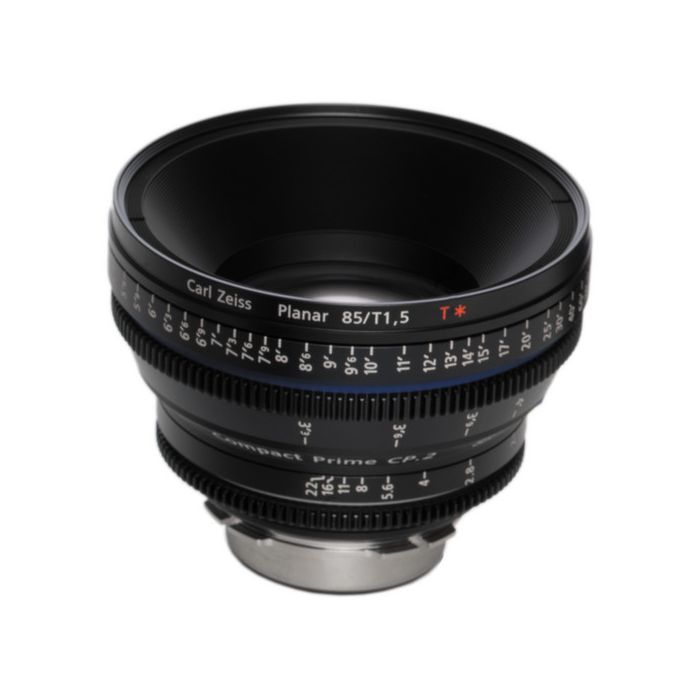 Announced at NAB 2012, this lens is a super-speed addition to ZEISS's Compact Prime CP.2 family of cine primes. Like the rest of the family, the 85mm/T1.5 features an interchangeable-mount system that affords a major forward-looking benefit -- not only can the lens now be used with cameras of different mounts, but rather it is ensured to also be compatible with most all future cameras. The system offers compatibility with PL, EF, F, MFT and E mounts. ZEISS's website provides instructions on how to dismantle an existing mount and assemble a new one. The five mounts allow use with cine cameras and DSLRs.

The fast T1.5 does so well in low-light, night and non-bright outdoor environments, that it allows filmmakers to conveniently pursue more creative shots in low-light, especially with high ISO DSLRs and camcorders. The outstanding handle of low-light also serves to limit the need for artificial light and thus allows more mobile filmmaking and delivers more natural-looking scenes. The fast aperture additionally offers more creative possibilities when aiming at a cinematic shallow depth of field.

As for high flexibility, in addition to the interchangeable-mount system, the 85mm/T1.5, like the rest of the CP.2 family, provides full coverage of full frame 24 x 36 sensors. Accordingly, it can, now or at a future time, be used with any 24 x 36 sensor camera, such as the Canon 5D and 1DC and the Nikon D800.

The lens also offers follow-focus flexibility. Across the entire CP.2 family, the front diameter is consistent, focus and iris gears are standard, and the housing is cine-style, offering thus compatibility with all standardized follow-focus systems. In addition, the 85mm/T1.5 also features a focus ring rotation of a manual 300° and as such allows accurate follow-focusing.

Furthermore about flexibility -- for anyone who wants to take advantage of the 4K shooting capacity of many of the cameras being released, the entire CP.2 family, with the 85mm/T1.5 included, is 4K-compatible.

The 85mm/T1.5 is also color-matched with the rest of the CP.2 lineup, and so swapping it with another from within the set can conveniently be done without correcting for changes in post.

Built sturdy and with long-lasting optics, and promising future-proof compatibility, the 85mm/T1.5 can be relied on for many years of use in sharp resolution.

The particular page you've clicked on is for an MFT mount version with imperial body markings.

What payment methods are accepted?

CameraPro accepts all the major payment methods including cash, bank transfer, EFTPOS (Visa, MasterCard and American Express) and PayPal, as well as Zip Money. Please note that all prices on our website are quoted based on payment via cash, bank transfer or EFTPOS debit card.

A 2% surcharge applies to PayPal payments made online, over the phone or in store.

A 0.75% surcharge applies to credit card payments made online, over the phone or in store.

All credit card and PayPal payments made online or over the phone are subject to a verification process before your order can be dispatched. CameraPro will contact you via email after we have received your order to complete this process.

Can I pick up from your store?

Does a camera I purchase from you come with a genuine Australian warranty?

Active
Video chat with us