$659
Check stock
Whats in the box? Add to Wish List + Add to compare 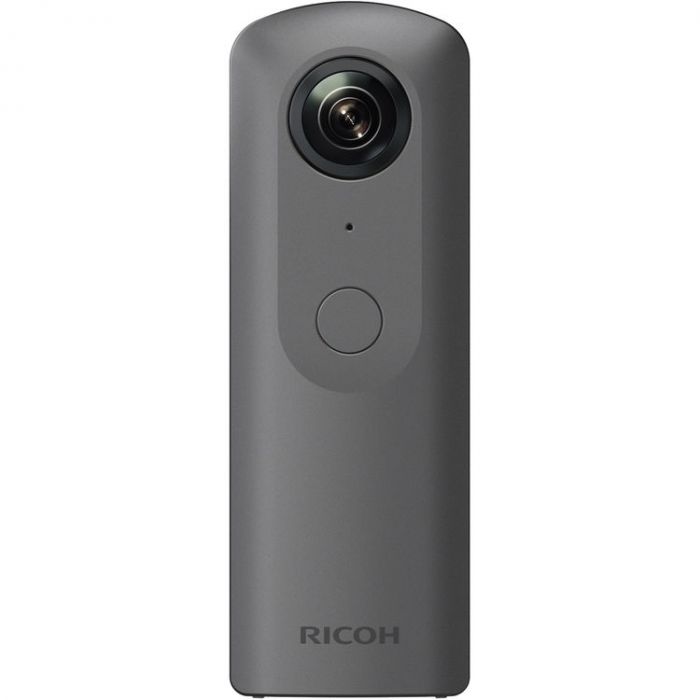 The Theta V 360° 4K Spherical VR Camera is easy to use and compact enough to carry everywhere. A new image sensor and processor produces more realistic “as-if-you-were-there” 360° content. High-speed data transfer allows you to quickly and wirelessly upload 14 megapixel stills and high-resolution 4K videos for immediate showing and sharing. Omni-directional audio recording functionality enables 360° spatial audio. The camera can connect to a mobile device using either Bluetooth or wireless LAN to allow for flexible operation based on user preferences. In addition, the Theta V has a highly expandable operating system so that it can receive future performance enhancements through firmware updates.

Image data recorded on THETA V can be played back in 360 degrees on a monitor such as TV. The THETA V also functions as a remote control which can be used to select the image file and move displayed 360 degree image up, down, left, and right. It can also zoom-in and out.

The Qualcomm® Snapdragon™ is used as a main processor. It delivers a variety of improvements including faster image processing and wireless transfer speed, and power saving capabilities.

Four built-in microphones make it possible to record audio independently from four directions. This is then converted to a format that recreates natural 360° spatial audio.

This is a four-direction, 360° spatial audio microphone designed specially for the THETA V. Use it to record even higher quality audio with a more realistic

This is an authentic waterproof housing with JIS Class 8 equivalent protection class for shooting underwater to 30 m. The housing features AR anti-reflective coating and dirt-resistant coating.

Equipped with a gyro sensor

This model is equipped with a new gyro sensor in addition to the conventional acceleration sensor. Tilt detection precision has been significantly improved, along with top/bottom correction precision enhancements and the ability for Remote Playback.

Advanced image processing technology cultivated over the years in camera development deliver image quality with minimal loss of shadow detail and highlight blowout even in scenes with varying levels of contrast. The white balance algorithm has been completely retuned to achieve natural hues for a wide range of scenes.

The minimum shooting interval is 4 seconds. This enables a greater range of use when creating time lapse videos.

In addition to wireless LAN, Bluetooth is now adopted for constant connection4 to your smartphone. Enjoy instant remote shooting and change shooting settings wherever you are.

Communication speed for both still images and videos is drastically improved. The maximum data transfer is approximately x2.5 faster than that of conventional models.

A new system based on the Android OS is used on this mode. Adding plugins to the camera makes it possible to expand various features.

What payment methods are accepted?

CameraPro accepts all the major payment methods including cash, bank transfer, EFTPOS (Visa, MasterCard and American Express) and PayPal, as well as Zip Money. Please note that all prices on our website are quoted based on payment via cash, bank transfer or EFTPOS debit card.

A 2% surcharge applies to PayPal payments made online, over the phone or in store.

A 0.75% surcharge applies to credit card payments made online, over the phone or in store.

All credit card and PayPal payments made online or over the phone are subject to a verification process before your order can be dispatched. CameraPro will contact you via email after we have received your order to complete this process.

Can I pick up from your store?

Does a camera I purchase from you come with a genuine Australian warranty?